How Important Is Music Theory In Electronic Music Production? 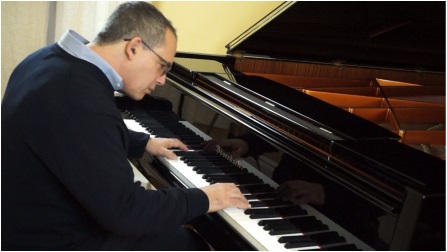 For musical beginners and even experienced musicians, the worlds and genres of electronic music making and production can be confusing. So in this post, we’ve asked Dr. Mark Polishook, a renowned jazz pianist, electro-acoustic musician and self-confessed synthesiser technology addict, the question we hear time and time again:

How important is music theory when it comes to electronic music production?

Here’s what Mark had to say on the topic…

“That’s a really interesting question because so much of what I might say depends on the interests of the person asking the question. At the same time, it’s a question that I think assumes yes, we should learn common-practice music theory—scales and chords and such and how they all fit together—because those things are universal to musicianship and music making in general. Perhaps the best way forward is to ask what’s helpful knowledge for those who want to explore electronic music production?

About music theory as something universal: most musicians I know transport to music composed between 1600 and 1900—more or less, the music of J.S. Bach to Gustav Mahler. Or, if musicians have a background in jazz and pop music, then the common chord progressions in those idioms become the music theory. Practically and historically speaking, that all means that we’ve come to expect music with instruments like pianos and guitars to consist of scales and chords.

Electronic instruments, on the other hand, model sound with electricity and we hear what results through speakers. In other words, that’s a space in which electricity is the driver behind sounds we hear.

That, in turn, means that our focus turns to sound itself. Is it possible that electronic music production doesn’t require knowledge and expertise that goes outside boundaries of traditional common-practice music theory?

There’s a style known as musique concrète—Karlheinz Stockhausen and Edgard Varèse were among its main practitioners—where composers cut and spliced pieces of recording tape to disconnect sound from the context in which we usually hear it. A perfect example of this is playing a sound backwards.

That’s a technique that’s been in use long before it became a staple sound in today’s pop music. It’s also among the techniques the Beatles used when they produced their Sgt. Pepper album.

It’s one of those interesting things, but there’s a picture of Karlheinz Stockhausen on the cover of the Sgt. Pepper album. That can’t be coincidence. Rather, it shows the Beatles sought out possibilities that didn’t exist within the world of common-practice music theory.

Of course, the Beatles, some of whom came to music-making through backgrounds that included time spent in art schools, weren’t trained musicians. Put that together with their interests in music concrète and we can say that common-practice music theory doesn’t really explain what happens when a recorded sound is played backwards.

Then, in contrast to music concrète, there were individuals, such as Lev Theremin, who made electronic instruments that were meant to be played in ways that traditional acoustic instruments wouldn’t otherwise permit. For example, one performs on a theremin, the instrument designed by Lev Theremin, without actually touching it.

The way that works is a theremin performer waves their hands in the air. That, in turn, alters the electromagnetic field emitted from a pair of antennas attached to the theremin.

In other words, moving one’s hands through space controls the electrical circuits that activate the speakers. That then creates what we recognise now as characteristic sound of a theremin.

That may all sound extremely technical and perhaps recondite. But if you’ve heard the Beach Boy’s Good Vibrations or if you’ve seen the movie The Day The Earth Stood Still then you’ve heard a theremin, an instrument with a rich and colourful history. Regarding that colourful history, who knew when Lev Theremin was making Theremins in 1930’s New York City that he was a Russian spy working for the KGB?

My opinion is all of these examples point to a need for musicians who aspire to make electronic music to know something, if only a little, about electrical engineering, acoustics, and, of course, music theory. We might as well throw design and computer science into the mix.

That’s because when a musician enters into electronic music production, they are designing sound with technology. But, the amazing thing in all of this is an aspiring producer of electronic music don’t have to go all that deep into any of those subjects to reap the benefits of knowing something about them.

Therefore, it’s not a question of becoming a specialist in many areas. Rather, it’s much more important for an aspiring electronic music producer to be a generalist across subjects that include but go beyond traditional music theory. And that, perhaps, is how we get new and exciting music that, like Sgt. Pepper, sounds so natural that we can think it’s always been here, there, or somewhere!

So my answer to the question of how important is music theory in electronic music production? Maybe best to say is music, like everything else, changes.

Where music theory was previously a sine qua non, perhaps now we need to question that. Maybe there’s more going on in the music we like than we know?”

Mark Polishook’s interest in electronic music began in the 80s, when he first came across a synthesiser when playing with David Clayton Thomas, the former lead singer for Blood, Sweat & Tears.

Since then, he has taught as a faculty member composition and music technology at universities in America and given seminars on composing, improvising, and electronic music in North America, Europe, and Asia. Mark calls the music he creates with technology and the equipment that he uses the “electronic things.”

Find out more about Mark and his teaching at https://www.polishookpiano.com/ and visit Finchcocks at https://www.finchcocks.com/ to see the range of courses and workshops it offers.

How Important Is Music Theory In Electronic Music Production? was last modified: November 21st, 2018 by Emma Williams
Please Share This

Video Shows You How To Write and Arrange Music

Using Looping in Your Music Production

When mapping songs, you end where you want writing the song too, not out in left field lost. The focus of your song is solid, and therefore, easy to understand which ‘draws the listener in’ to your song. Drawing the listener into your song is very important, and making the song easy to follow is a large part of drawing them in. The old way called ‘KISS ‘which stands for ‘keep it simple, stupid ‘works very well in songwriting as it does for many other things. The important thing is not to let songwriting structure get in the way of writing. When inspiration hits you, ‘get it all out. ‘After you’ve written all the words, phrases and so on that came to you, then go back and begin mapping this out.